Hey I had a temporary ban by Commodore64. Was hoping maybe I could have it appealed or reduced considering the circumstances don’t exactly merit it.

GDF was having a real one in the chat this AM and I was trying to tell him to log off while avoid called him hitler.

Commodore64 told everyone to calm down.

I said “if people stopped posting videos they would stop being hitler” inferring that everyone gets called hitler for posting videos and its just stupid.

It was at this point Commodore64 banned me, I believe he thought I was egging gdf on further but really I just want to put an axe in this “calling people hitler for posting” thing 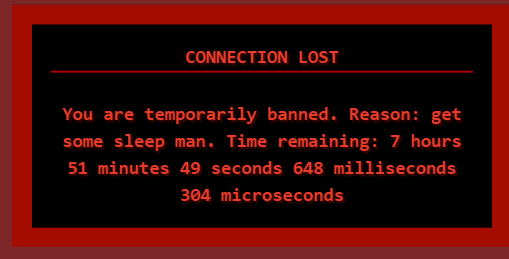 The thing was, you were drunk and belligerent and I am sober and at work. I was trying to tell you to get to sleep. Don’t drag me into this

why does everyone constantly think i’m drunk when i call them out on shitty attitude? lol

You were both being aggressive and shitty so I gave you a 8 hour break.

Attacking other users is not permitted, and that includes calling someone a drunk. When I asked avoid to stop he left, when I asked you two to stop you didn’t.

Also I’m not sure where this nazi talk is coming from, but it’s going to stop.

If you really really focus on what I wrote WRT the comment that got me banned… I was defending GDF more than anything.

Also if any moderator feels that the parties involved have cooled down and want to unprobate them so be it. But my decision is final.